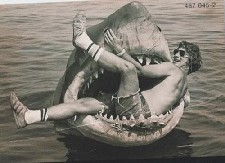 Gone Girl could be the best film so far this year but Viewer discretion is DEFIANTLY advised. The film follows Nick and Amy Dunn a newly wed couple settling into life in Missouri. But it that all changes when Amy goes missing. The entire country jumps on board to try and help find Amy. And slowly everyone starts turning on Nick. The Back nice guy that is pretty oblivious to everything around him. But if you think you have this movie figured out, think again.

THE GOOD STUFF! It's directed by David Fincher. One of the most ambitious dark directors of the modern age. And he's done it again. The script is very tightly written. Movies based on books tend to either flop or are critically praised. But when you have the author of the book writing the Screenplay not much can go wrong. The Dark humor that is sprinkled in is perfect for the scenes that its used in and is often hilarious. The film has a mood surrounding it that is unlike any movie you will ever see. Through out you are at the edge of your seat yet also constantly looking behind you as a deeply unsettling feeling creeps over your body. This is in large part thanks to the performances by the leads. Ben Affleck and Rosamund pike are so terrific in there roles as well as just about everyone else.

THE BAD STUFF... Well like I said there isn't to much that can go wrong when the books author is on board helping write. There is really only one thing that I didn't like in this film. Near the beginning there was a lot of nudity. Now don't get me wrong i'm OK with it as long as it helps to obtain what the film is going for. Which closer to the end its used perfectly. But the nudity at the beginning feels completely unnecessary and forced. And there wasn't much shortage of it either.

The Verdict Gone Girl is without a doubt one of the best films of the year. Featuring outstanding acting, superb writing, and just an overall mood to it that is unlike anything in film. But some of the nudity took me out of the movie because of how forced it felt.